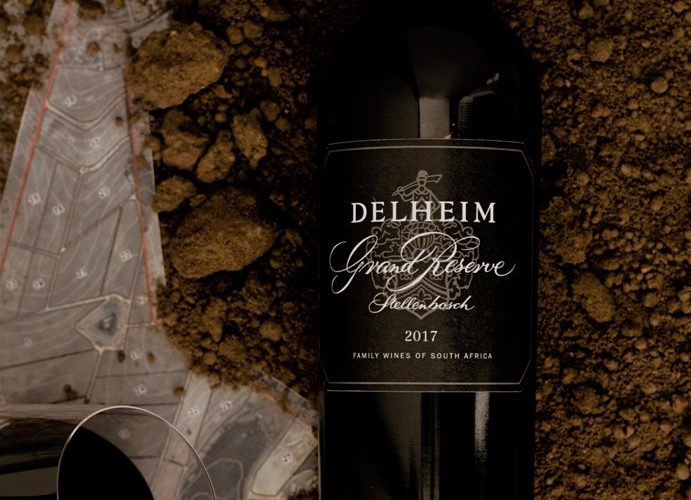 The Greater Simonsberg appellation of Stellenbosch towers as a beacon of great South African wine, and especially red grape varieties. It is in this location that renowned family winery Delheim produced its latest flagship Grand Reserve 2017 Bordeaux blend.

Significantly, the 2017 vintage marks the 40th year that the iconic Grand Reserve – the apex of Delheim’s red wine collection – has been in existence. It is only made in years of exceptional quality with the maiden vintage released in 1981.

Crafted vintage-to-bottle with the specific intention of being the most outstanding expression of the harvest, this stately wine is an eagerly anticipated collector’s item of the highest quality.

Over the last four decades, no matter the winemakers involved, the Grand Reserve has achieved its unwavering style because of its truly remarkable Simonsberg terroir. Quality has always trumped quantity in its making.

The wine has attracted a loyal following of connoisseurs who understand the celebrated winery’s commitment to consistent quality and simply letting the vineyards speak through the wines.

He joined Delheim in 1979 as winemaking assistant to the legendary Spatz Sperling, Delheim’s owner and pioneering winemaker in his own right, before taking over the helm.

Kevin credits a sojourn in California, in 1981 as the first winemaker invited from South Africa to the Robert Mondavi Winery, for cementing the possibility that his home country could produce a super-premium red.

That same year, he launched the Delheim Grand Reserve, which went on to win the prestigious General Smuts Trophy in 1986.

The mantle for the wine now falls to current Delheim winemaker Roelof Lotriet, who shares the same alma mater as Kevin of St Andrews School in Bloemfontein.

Remarking on the 40-year milestone, Roelof says such achievements are only possible with sound starting points. “The principles from the parable of the wise man building his house upon rock were instilled in me from young age. Delheim has made wine for 82 years. It has understood the value of good sites and specific terroir as a foundation of world-class wines.

“In the case of the Grand Reserve, Cabernet Sauvignon in this specific location has made the variety the wine’s dominant building block.”

The 2017 vintage is rounded off with touches of Merlot and Cabernet Franc. It spent 18 months in 300L French oak barrels of which 30% is new. During this time, lot allocations for the Grand Reserve are made, always based on quality. A final selection of the best barrels ensues before test blends are made up. The wine is given time to integrate and settle before bottling, and further 18-24 months of maturation prior to release.

The vineyards that produce Delheim’s premium Cabernet Sauvignon have a long history themselves. In the mid-1970s, Spatz acquired 80ha of prime red-wine land on Klapmutskop nearby. On this property, named Vera Cruz, Cabernet Sauvignon thrives on southwest-facing slopes.

In 2010 Delheim undertook replanting of Cabernet Sauvignon to maintain vineyard health and quality. By 2016 most of those vines were producing quality wines again.

He adds: “Making a great wine once is easy. Delivering an exceptional wine that is consistent in quality – for 40 years – is no small feat.”

Other recent accolades include a Top Ten spot in the Prescient Cape Bordeaux Red Blend Report 2021 by Winemag.co.za and an impressive 93-point score in the 2020 South Africa Special Report by internationally acclaimed wine critic Tim Atkin, British Master of Wine.

The Grand Reserve 2017 shows a complex nose of dark fruits dominated by blackberries and blackcurrant followed by notes of tobacco and tomato leaf, fresh lead pencil shavings and cassis. The palate is elegantly poised with dark red fruit and a smooth chalky tannin finish that’s true to the area.

It is definitely a wine to keep – Grand Reserve is designed for long-term ageing. Roelof recommends up to 15 years from vintage.

The 40-year anniversary of outstanding terroir is being celebrated with a special offer via Delheim’s online store. Purchase a case of Grand Reserve 2017 at https://www.delheim.com/shop-online/, and receive a complimentary magnum of Delheim Grand Reserve 2015.