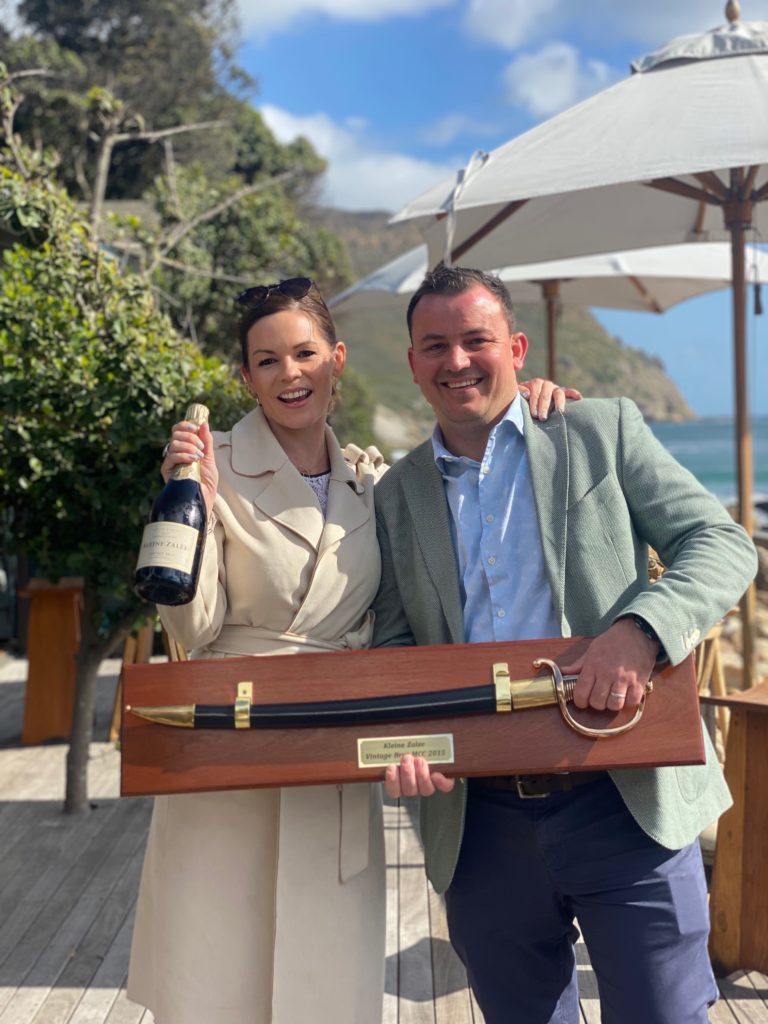 Stellenbosch winery Kleine Zalze, one of the most commercially successful and award-winning Cape cellars, etched a place in South African wine history by winning the award for Best Producer at the Amorim Cap Classique Challenge which this year celebrates its 20th anniversary as the country’s foremost wine competition exclusively committed to honouring Cap Classique wines.

In a record line-up of 135 entries, the Kleine Zalze Vintage Brut MCC 2015 achieved the top score, winning the category for Best Brut Cap Classiques as well as the award for Best Producer at this year’s competition.

The trophy for Best Museum Class Cap Classique, awarded to a wine from a vintage of eight years or older, was won by Boschendal Wines for the Boschendal Jean le Long Prestige Cuvée 2009.

The Amorim Cap Classique Challenge was founded in 2002 by Amorim Cork, the Portuguese company which is the world’s leading producer of cork wine stoppers, in association with the now-defunct South African publication WINE Magazine. This year’s 20th anniversary of the competition coincides with the 50-year celebration of the advent of Cap Classique as a wine category. The first Cap Classique wine was made in 1971 by the late Frans Malan of Simonsig Estate in Stellenbosch. Coincidently, Simonsig won the first Best Producer Trophy at the inaugural Amorim Cap Classique Challenge 20 years ago.

Joaquim Sá, CEO of Amorim Cork South Africa and a founding member of the Cap Classique Challenge, said this year’s competition was held at an important point in the country’s wine history.

“Few other wine countries, if any, can show precise records stipulating a specific year in which one of their wine categories was established,” says Sá. “In South Africa we are fortunate to trace Cap Classique, the country’s offering of bottle-fermented sparkling wines made in the traditional method, back to 1971. In 2021, thus, we are able to celebrate both the beginning of Cap Classique as a jewel in South Africa’s wine crown as well as – through this competition – the remarkable quality of the country’s Cap Classique wines.”

Sá says that 50 years since the introduction of Cap Classique, South Africa has established a formidable reputation for this sparkling wine style, both locally and internationally.

“I think that Frans Malan, who pioneered Cap Classique, would be extremely pleased to see how the wine category he founded has turned out to be one of the features of the premium sector of South African wine,” says Sá. “As the annual Amorim Cap Classique Challenge shows, the country has small estate producers to large brand-owners committed to excellence in this wine style. Diversity of styles and the uniqueness of the Cape winelands’ terroir has contributed to ensuring a Cap Classique offering of multi-pronged brilliance which has made it one of the most popular sectors of Cape wine.

“Amorim is exceptionally proud to be associated with Cap Classique through our relationship as suppliers to those who make this wine, as well as through the Cap Classique Challenge which I believe has contributed to this wine’s rising star which is shining brighter than ever.”

Besides the aforementioned trophies, one Double Gold (93pts and over) and 24 Gold Medals (90 to 92pts) were awarded. The category for Brut Cap Classiques received the most entries (47), with 37 Blanc de Blancs entered. Rosé received 32 entries, Nectar 10 and Museum Class 9.

The full results for this year’s Amorim Cap Classique Challenge can be found on www.capclassique.co.za or downloaded HERE.